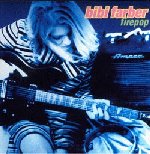 Bibi Farber has gotten Television member Richard Lloyd to produce her debut album. Not a bad coice, but Fraber stands firmly on her own feet.

She makes sprightly pop with clever lyrics and hummable choruses. When Farber covers Lolita Pop’s Salta Diamanter in flawless swedish it’s a nice surprise and a great version of the song too. “That Girl again” is as good as anything Kirsty MacColl recorded.

Bibi Farber has made a refined pop record that I like a lot.