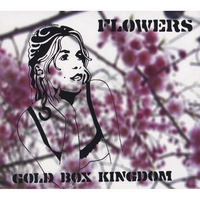 I reviewed a previous release, Heavy & Light by Gold Box Kingdom last year. I had compared lead singer, Amy B to Noe Venable; who it turns out, is an idol of Amy’s. The musical style is not really similar, but Amy’s voice does sound like Noe’s on occasion. But not enough to call her a copycat at all.

Opening number, Flowers, reminds me of bands like Everything But the Girl. It’s pop, but has a nice jazzy vibe too. Sort of a ‘Sunday morning coffee and newspaper’ tune.

I really like The Last Line. The keyboard really adds s a cool element. It reminds me of the songs I listened to when I was a kid. (When? Don’t ask!)

These guys have a really nice sound. It’s hard to describe. Sometimes It’s jazzy, but there’s a old school (70s) pop feel at times as well. It’s very comfortable music. Much like their other record, though I seem to remember some more rock-ish songs on the previous release, this one is a bit more mellow as a whole.