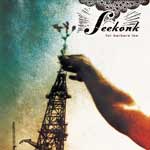 You want shadowy, ambient pop? You got it. Just pick up Seekonk’s debut CD, “For Barbara Lee”. This is the kind of music that just washes over you. When listening on a stereo at home or at low level in a car, it’s nice peaceful background music. When listening on headphones (where you get the whole affect) it is literally dream-inducing. You sort of melt into the music and just ride it along.

Shana Barry’s breathy vocals are perfect for the genre and the instruments play beautifully well together. See the band line up and what they play below to get a good idea of the variety of instruments you’ll hear.

Though the CD only has 8 tracks, don’t think you aren’t getting your money’s worth here. Each song clocks in at an average of six minutes long and they’re all beautiful.