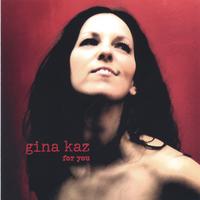 I “met” Gina Kaz on MySpace so you see, even if you think it’s an Evil Empire, it is good for something. I listened to a track or two and asked her to send a CD. So I knew I’d like it before it even arrived. And I do!

I have an album that I bought on a whim. It’s called “Creation” and it’s by an artist I had not heard of previously and have not heard of since; though Anna Maria has reviewed her here. Her name is Nina Hynes. Gina’s voice at times reminds me of Hynes’ especially on “She Moves Me”. Gina’s music is a slower style, but the voice…

Gina’s songs feature both piano and guitar, almost evenly. “Dragonfly” begins with a beautiful piano intro that reminds me of Vienna Teng. It’s lovely. This is probably my favorite song on the CD. After I declared that I looked at the liner notes and see that it’s one song that is all Gina. She wrote both the music and lyrics for and plays the piano. That makes me smile. What a talented woman.

“On My Legs” is another really cool song. Her great pop voice shows well here.

This is really just a great sensitive pop album with great melodies, intelligent lyrics and that great voice. Though I liked it upon listen number one, I like it more with each subsequent spin. These songs will really get “into” you.

A few years ago, I reviewed Gina Kaz’ previous album “Decipher” and liked it very much. Her new album sees her continue on her artistic journey with great results.

“She Moves me” is a lovely, ethereal song that recalls recent Tanya Donnelly. Kaz’ voice and the instrumentation are very much in synch.

“We can take care of each” is a sweet song that Kaz handles well.

“You are near” is one of the standouts. Kaz sings softly and the backing is ghostly. Sometimes less really is more.

“Forgive What has been” is just beautiful and inspiring. Kaz sings of letting go of the past whilst playing her piano.

This record is ample proof of Gina Kaz’ great talent.

Track Listing
Listen to track samples
1. The Conversation
2. She Moves Me
3. We Can Take Care of Each
4. Water and Wine
5. Strength
6. You Are Near
7. On My Legs
8. Forgive What Has Been
9. Dragonfly
10. Inner Child