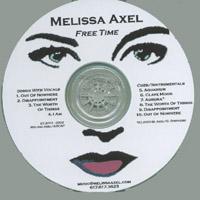 This just confuses me. The CD Baby site says it is an EP but there are 10 songs here.

The first five songs are vocals and piano, with some extras thrown in as well. Melissa Axel has a pretty voice and plays piano quite well. The rest of the CD is some funky instrumental stuff that is part techno, part orchestra. It’s nice background music. “Clave Moon” and “Aurora” have some especially funky sounds. “Clave Moon” in particular sounds like it ought to be used as a film score.

“The Worth Of Things” is a really cool piece, probably the best one on the recording, in my opinion.

The music is nice. This CD is yours for whatever you want to donate. (Unless you order it at CD Baby). This is a project put together by a group of people who did this all in their free time and they don’t want to charge for the music per se. So send them a donation and they’ll get you a copy.