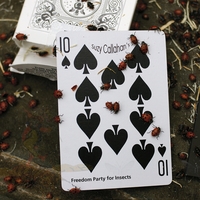 Suzy Callahan’s records have previously been reviewed here on Collected Sounds, once by Anna Maria Stjärnell and once by myself.

I don’t really know how to describe the genre is, it’s not quite pop, not quite country, not quite folk, and not quite alternative either but perhaps a little bit of all of that rolled into one.

She has a nice comfortable voice. In my previous review I had stated that her voice sometimes hit an “off note”. I don’t hear that here.

I like her sense of humor. Her bio states, of her songs: “The influences that influenced them were very influential.” This cleverness appears in the songs as well. Which makes me very happy.

Her melodies are easy on the ears, yet she throws in some curveballs to keep it interesting.

God of Heartache is nice. She doesn’t believe in him if you were wondering. And she makes a good argument!

This is a really nice record with which I think many will connect.

1 Freedom Party For Insects
2 Hard On Us
3 God of Heartache
4 Never Lonely in Austin
5 Southern Belle
6 I Built a House For Frank Lloyd Wright
7 Mr. Right
8 We Have a History
9 I Smile