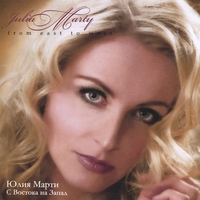 Julia Marty grew up in the former Soviet Union (her birth name is Ioulia Vladimirovna Danshina) but now lives in Missouri. She began her musical training at 6 years old and the experience shows.

I suppose it helps that she grew up in a musical household with a father who was a pianist and her mother a choirmaster.

Her music is described as Russian Folk music. But it really doesn’t sound very folky to me. But American folk music is different, I understand that. I honestly could not categorize this. I can tell you what it’s not, but telling you what it is, is very difficult.

So I’ll just say that her voice is beautiful, it sounds especially lovely when singing her native language, Russian. It’s an odd language to the American ear. It can sound quite harsh depending on who is singing, but Marty makes it lovely.

The piano on the these tracks is great, but she also uses a variety of other instruments that I cannot place (could just be keyboard). On Mama’s Fairy Tale the intro sounds like it’s played on a child’s piano or a music box. It’s very nice and sets the mood well.

This is a very nice, unique record that I think will appeal to those who search for an other worldly sound.