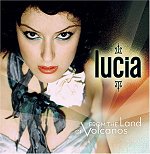 Lucia once sang with rock group Drill and collaborated with KMFDM. Her solo debut was picked up by a major label that then wouldn’t release it. Thanks to a smaller label it’s now out. The sound is less abrasive than her previous band was, but the attitude it intact.

“I Don’t Care” is a groovy song enlivened by Lucia’s gorgeous lead vocal. It sounds commercial but not without bite.

“Nothern Star” is filled with longing and sounds not unlike Madonna. Not that surprising since Madonna’s erstwhile collaborator Patrick Leonard co-wrote the song.

“Feels like Summer” is an up-tempo pop song with an irrepressible chorus.

“What you Become” is slightly scary, almost like a pop version of Marilyn Manson. Luckily Lucia has her own vocal style so it never becomes an imitation.

“Monkey Puzzle Tree” is also quite sinister, but poppier and catchier. A full-blooded KMFDM remix of it closes the album in style.

It’s a very nice debut in all.