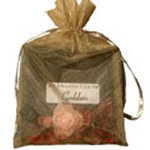 First thing I noticed is that it’s mixed really low. I had to turn my speakers up quite a bit for it to be nearly as loud as the CD I previously listened to. The copy of the CD I received only had three songs on it: ‘Goddess”, “Elijah, Elijah” and “Simply I”. The latter isn’t even on the CD you can buy. So this is kind of a weird review, but I was able to listen to at last part of some of the songs on CD Baby.

Other than the production…

The music is folk with a Celtic feel. Cox’s voice is nice and rich. The melodies are nothing drastically out-there, just your folk type melodies, but they do have that Celtic feel to them. It is reminiscent of a really stripped down Loreena McKennitt or Edie Reader.

I can’t say this record stands out a lot in amongst the others I’ve reviewed recently, but that is not such a bad thing. It is pretty. If you like Celtic folk, I think you’ll like this recording.