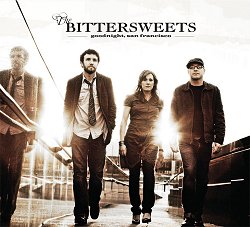 The Bittersweets have created an album full of sleepy, dreamy folk songs. Hannah Prater’s voice is really pretty. They remind me a little of Ellery and not just because they are also a male/female duo and were both on Virt records. This can be a pretty mellow record at times. And a lovely one.

As I was listening one day, I wrote down:

When the War is Over is really pretty, but sad.

Then another day later I wrote:

Is Anyone Safe is pretty. Also sad. This one has a really great melody that’s quite infectious.

Then I listened weeks later and the song 45 caught me with these lyrics:

“Everything is broke, everything is sad”…and “nobody ever said you’re gonna get high and take your life with a 45 in your pocket.”

Sheesh. The songs are kind of downers!! The music is happier sounding than the lyrics are. In fact, many of the songs are downright upbeat sounding…until you listen to the words. While this is a nice record, I would not suggest listening to it when you’re in a fragile state of mind.

That said, the vocals are soothing and reminiscent of someone else but I can’t place it. I have reviewed them before so perhaps that’s it….but I don’t think so.

My copy has a track 12, called Fortunate Wind which is much meatier than the rest of the CD. Louder, heavier, very cool. Might actually be my favorite track.

Anyway, nice record if a bit of a downer emotionally. But the songs are so good and singalongy that it’s still a great find.

1 comment for “Album Review: Goodnight San Francisco by The Bittersweets”