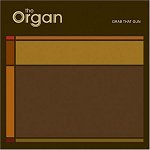 Every once in a while, and lately it is has been a frequent occurrence, you have bands that have been playing in old rusty garages for a long couple of months, and that are suddenly swept away by the collective hype of the global indie-mass, dubbed to be the next saviours of rock, release a phenomenal debut album, and then slump back down together with their short-lived reputation. The Organ has not yet suffered such a fate, nor is it necessarily condemned to it. However, it has every potential to. This band is unlike any I have heard, undoubtedly because of the combination of fascinating guitar hooks, an electric organ in almost every song, and Katie Sketch’s vocals. I believe that she may be the connecting factor between all elements, as I believe that any other vocalist would have not had the same effect. Her voice gives you a beautiful melancholic feeling, something the gloomy sound of the organ (Although they have managed to make it sound remarkably cheerful at times, too) only amplifies.

The album starts with “Brother”, a song that later proves to be different from the other songs on the albums: where most tracks last only 2.30, this one lasts 1 second over four minutes. The song, after the wonderfully catchy intro, starts with “Here we go // We’re back again // Look alive “. It are the rather simplistic lyrics that become very meaningful, not only in this song but throughout the whole album: It are not the lyrics, but the intonation, the deeper meaning that is what captivates.

The next song is “Steven Smith”, a song that starts with a cheerful organ-based intro. That organ remains a strong influence in the whole song, and it helps to set the mood that is mostly set by the rather vague lyrics. The song lasts 2.06 minutes, which is exactly enough.

An 11-song album under 30 minutes is not something you see often. It is even harder to find such an album when it’s a debut album, and it’s hardest of all when you find it of a band that has the potential to add something innovating to a genre that can really use it.