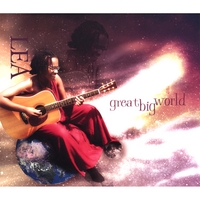 I really like this record. I don’t know why it’s taken me so long to write about it. I’ve had it for a few months now. It’s one of those that I just am not sure what to say about it other than I am enjoying it. But I’ll try and elaborate.

First off, Lea has a lovely voice. It’s very easy on the ears. Comfortable. The melodies are well written, nothing terribly fancy or surprising, but very nice. I especially love the melody in “Everything’s Fine”. There’s a great guitar line that makes that song so appealing.

The songs cover a range of topics, family, friendship, love, and politics…all done well. She’s a very good songwriter in both melody and lyrics.

I’m a tad confused by “The Swell” (which I can only assume is an abortion song). At the beginning it sounds like she’s upset with the government making choices for us, but then she also sort of seems to understand their point: “Sure he’s a good man, meaning well…” (unless she’s being facetious) but still…she seems upset about it. She goes on to say how the “noble men” should not be making these choices for us. Then it ends with “I’m a girl in a sterile room, reconciling with eternal doom…”. Perhaps it is saying that a woman in that situation is tempted to believe that it’s evil? I don’t know. It’s a little confusing to me. But it doesn’t matter, the song is good. While it has a bit of a country feel it’s got a great melody.

At first I thought “Jeni” was a song about a girl (sister) that died young. The narrator is saying that now it’s up to her to be the one in the family that did well. But then at the end she says “Jeni called yesterday to say she was okay”. My guess is that Jeni just left the house at a young age and moved on to a life of which her parents do not approve.

“Memorial Day” is a great tribute to those who gave their lives in battle. I happened to listen to it right on Memorial Day this year and it got me. Right here.

This is a really solid record and one that I think many fans of folky-pop will enjoy.

Interesting (?) Note: As I was going to post this review I went to look her up on MySpace and found that I had a friend request from her! Synchronicity!