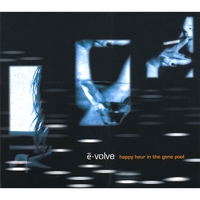 First of all I love the album title. How clever.

Evolve would probably fall into the Trip Hop or techno vein.

The opening song, August Moon, makes me imagine I am driving late at night through the city, windows down, playing this. Very energizing, but still chill. No vocals, just the cool loungy instrumentation.

When we do get to hear the vocals (singer Margo Reymundo) they are spot on. Subtle but enhancing. Partially the production and partially great vocal talent make this a winning combination. They remind me a little of Bitter:Sweet but not as danceable.

I will say I could do without the rap on track 4 (By Definition: Cool). It’s not that I have something against rap, it’s that I just don’t feel it belongs here. But what do I know!?

This is a really cool record, not for everyone probably and not for every mood, but if it suits you, it will suit you well.

Track Listing
Listen to track samples while you read
1. August Moon
2. Well I Gotta Story
3. Couldn’t Be More Wrong
4. By Definition: Cool
5. The Way Back
6. Do You Know This One?
7. Mellow
8. Rusty Ferrari
9. Mice On The Ice
10. Where Were You (Sunday Afternoon)
11. Bushwhacked
12. Detached Isolated & Remote