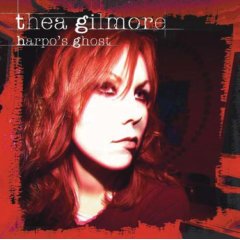 Some time ago, someone I met (and only know) online suggested I get a Thea Gilmore CD. The same person also suggested Gemma Hayes. I went to Amazon like a good little girl and ordered them both. They arrived. I listened. I went, “eh” and set them aside.

A couple of years later, I picked up the Gilmore album again and was instantly in love.

This happens a lot to me. Sometimes something doesn’t grab me when I first hear it. Maybe I’m in the wrong state of mind, wrong time in my life, whatever. Which is why I often pull things off the shelf at a later date and never throw away or sell anything I get. Ever. I never know when it’s going to become my new favorite record. So I was enamored with “Rules for Jokers” for a long time. I still love it.

So when I heard that Thea had a new record out I figured I’d get around to purchasing it eventually. But one day it arrived in my mailbox (this is why I love this non-paying job).

I put it in and this was immediately taken. I’ve heard the songs described as “Americana” but to be fair that was said by a British music lover. So it’s not what I would call Americana, but I guess it is a little different from her other releases. By the way I have since bought a few other CDs of Gilmore’s but nothing has grabbed me quite like “Rules…” This one comes close though.

One thing I love about her music is her voice and her accent. Being an American who loves everything British and especially singers who sing with the accent, this is not too surprising.

These songs, like all her songs, are very well written, catchy without being too mainstream-y and the lyrics amaze me all the time. She has such a great grasp on the language. Her lyrics have brought me to tears before and not because they’re sad, just because they’re soooo good.

So yeah, this is a good one. If you’re already a fan I think you’ll be happy with this, if you are new to Thea Gilmore, this will make you a fan. But then go get “Rules for Jokers” as well.