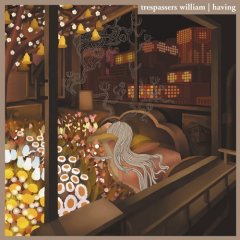 Trespassers William originally formed in 1997, but didn’t start producing their dreamy, lush music properly until the current formation was reached in 2002. That’s when the group issued Different Stars, an album that would prove to be so successful that it was reissued at a different label in 2004. Now, two years later, they have released their latest album entitled “Having”.

The album starts off strongly with Safe Sound, which distorts Anna-Lynne vocals and makes it sound as though she is singing underwater. That aside, it is a typical Trespassers William track. If you haven’t heard their music before, it is a very difficult sound to define exactly. It is a dreamy, distant sound with clear guitars and layers of soft, mellow instrumentation. The guitars and Anna-Lynne’s warm vocals are what give the tracks an infinite and warm feel to them.

Sadly, too many tracks with this stereotypical sound is too much. It becomes too mellow, to the point where one song sounds identical to the other. And that is what happens on this album; tracks like I Don’t Mind, Ledge and And We Lean In are very sparse with vocals which causes them to rely on the music alone. Trespassers William have proven in the past that they are capable of pulling off good instrumental pieces such as “Vapour Trail”, but the aforementioned tracks have a high amount of guitar-distortion, which eliminates the pretty details that makes the music so enjoyable. Adding to the that the fact that most songs are well over 4 minutes long, it can become a somewhat generic listening experience.

Fortunately that changes towards the end. Songs like My Hands Up, Low Point and the 12 minute closer Matching Weight have a good combination of music versus vocals, and especially Low Point has a lovely guitar piece that is very enjoyable to listen to.

The biggest miss on this album is the acoustic guitar. Where it was present on at least four tracks on the previous album, it is almost entirely absent (The only exception being Low Point, where it doesn’t serve a big role) on this one. And that is a shame. The acoustic guitar offers a more direct, down-to-earth kind of sound, and it served as an anchor to keep the music from floating into space. Now that that is gone, it feels like the music has drifted away on the wind and is almost too loose to grasp.

That aside, Trespassers William still make indefinable music that is almost too pretty to listen to. And if this would be your first album of theirs, you wouldn’t be disappointed. But those who are waiting for a new formula won’t find it on this album.