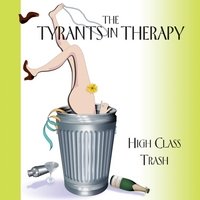 Well, I don’t quite know what to make of this album and this group. Of course, you can see for yourself by the cover that they’re probably far from serious. That is, the songs are silly. I don’t mean to imply they’re not serious musicians.

Some of the songs are genuinely clever, some try just a little too hard, but in all there is an 80s soundtrack vibe to this. It is filled with weird clever lyrics that make this really more novelty music than anything else, in my mind anyway.

Twice now, My Masculinity has reminded me of Dire Straits, which is not a bad thing at all.

As I said, I find some of the songs better than others. For example, I kinda like Theme From Tammy’s Revenge, and Saturday Night Live but I couldn’t wait for Three People Nude Below the Waist to be over. Harsh? Sorry. Truth.

Maybe I just am tired of musical theater-type music. That’s pretty much what this is. It is calling for someone to act out the songs on stage, but doesn’t play as well as an album to listen to. They’re talented, and I love theater, but I’m just not feeling this. I thought maybe I just wasn’t in the mood, but this has been in my player on shuffle for months now. I don’t know that I’ll ever ‘get’ it. But give it a shot! Maybe you will see what I don’t and dig it. I guess I’m just ‘over’ novelty music right now, and infortunately, my review pile is chock full of ’em.

Track Listing
1 The Truth Hurts
2 Ain’t Over Yet
3 The System
4 Apocalypso
5 Psychoactive
6 Zodiac
7 Saturday Nite Live (feat. Marc Mann)
8 My Masculinity
9 Bs Hollywood
10 Once Upon a Time
11 Don’t Be Scared
12 At the Cowboy Lounge
13 My Dying Girlfriend
14 Angels Remember
15 Three People Nude Below the Waist
16 Theme From Tammy’s Revenge
17 High Class Trash
18 Doubt & Pain Disco
19 Words Like That
20 Almost Winter
21 Ballad of the Tyrants in Therapy

[The Tyrants in Therapy Official Site]