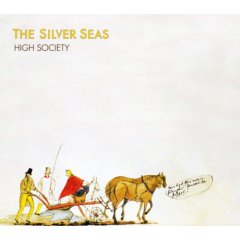 The first song, The Country Life, sounds a lot like Ben Folds to me. Especially when the harmonies kick in. I love Ben Folds so this is good. It’s piano based pop, though there is plenty of other stuff going on as well.

The record is pretty varied though, the songs do not all sound alike. Some even have a bit of a country twang (as on Catch Yer Own Train). But then even that song moves into a retro romp. Reminiscent of the Monkees or the like.

This is feel good music. Some of these songs have already made it onto mix CDs that I keep in my car. Who said the Mix Tape is dead? It’s just called the Mix CD now. I make them for my friends all the time. Whatever, I am a child of the ’70s-’80s, what can I say?

I love this; I wish I had more time to write more. While there isn’t a woman* to be found on this record, it’s definitely still on my best of list for 2007.

*I generally review female musicians, but I do get a lot of “Guy” submits and sometimes I damn love ’em, this is one.

Note: I was in New Jersey in April 2008 and I heard The Country Life being played in the lobby. I was bopping along for a full minute before I realized this was one of “my” artists! Talk about random!