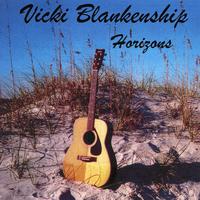 I reviewed Vicki’s previous album, “Don’t Forget to Breathe” in 2003.

I remember liking it quite a bit. But wishing that the jewel case art was more high quality. This was back before I got my share of CD-Rs with cover “art” that consisted of the track list handwritten on notebook paper so I didn’t realize how “bad” it could get. In comparison to those hers was great!

Well, I’m glad to say that this aspect has improved greatly (and it’s always possible that the version I got that time was a press version and that the one that went out to fans was nicer).

Vicki’s production company is called Spotted Kiva Productions named after her dogs, you gotta love a woman with dogs.

If memory serves, that release was more quiet folk. This one leans more toward the folky rock edge and is very well done.

“I Couldn’t Be Your World” is downright rockin’. It’s got the wailing guitars, growly voice, and everything. No folkie stuff there.

This is a good album of rock songs (there’s still a little folk left in her) that should please many a fan of female-fronted rock.

Interesting note: Vicki recently took over as the leader of IndieGrrl . Indiegrrl is association that was founded in 1998 by Holly Figueroa and has been a collective, of sorts, of Independent Female Musicians since then. Fantastic group. Here’s a thank you to Holly for creating it, and congratulations to Vicki for becoming their leader.