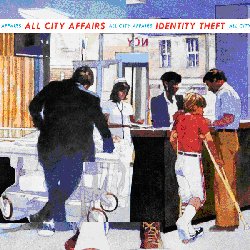 Peter Andreadis makes up most of the group All City Affairs, it’s sort of his child. Word has it he was previously in a band called Baby Teeth from Chicago. I am unaware of them, so I can’t compare.

There’s something about this record that says ‘throwback’ to me. Sort of a late 70s-early 80s feel. Maybe it’s the funky synth sounds. He also uses an echo effect on his voice and I think he’d be better off without it. It’s tempting to play with all the toys, but not always a good idea.

There’s also a tinny quality that gives it a sort of fake feeling too. Like there’s not a lot of emotion behind this. Maybe it’s the production. But I do think they went overboard on the synths. Quite repetitive. At least on the first few songs.

I did find that the melody on Different When We’re Alone was interesting enough for me to take note of what was playing (while it was on shuffle).

Upon a more exclusive listen (not on shuffle) I found I rather liked The End of Loneliness It has a nice clappy percussion that makes it more like that Sunshine Pop I like so much.

His voice is nice on So Much Control Part 2, it actually reminds me of Billy Joel. See, he does not need to put effects on it.

While I think there’s potential here, nothing really grabs me and it feels as if it’s missing something.

Track Listing
1.Flashback to When We Both
2.Were Young
3.One More Shot
4.Identity Theft
5.The End of Loneliness
6.Wonderful Now
7.So Much Control, Pt. 2
8.Little Pills
9. Different When We’re Alone
10.White People Clapping
11.Slide