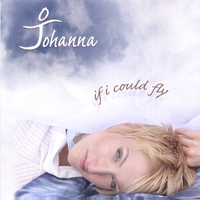 Album Name: If I Could Fly
Artist: Johanna
Year/Label: 2007 / Independent

The cover of this CD (and the title) led me to expect something really soft and maybe even religious-y. But that’s not totally the case. There are some soft sweet songs, but there are also some surprisingly classic rock elements here. On “Smoke in the Snow” especially.

“Free to Decide” is pretty radio friendly. “Already Gone” has a bit of a reggae feel. “Escalation” is lovely. Simple but haunting.

“Amazing Grace” is my least favorite. I’ve always disliked that song anyway, but this is just full of unnecessary theatrics that most artists tend to do on that one. For example, I heart Ani DiFranco and I can’t stand her version either.

Johanna has a nice voice, I can’t say it is terribly unique. I don’t know that I’d hear a song of hers that I didn’t already know and know it’s her. But there’s nothing wrong with it at all. It’s just not really a stand out.

If this record speaks to you it will likely be because one of the songs did. Lyric-wise, that is, it probably won’t be her “style” (because she doesn’t have just one, she’s kind of all over the map) and it likely won’t be her voice (it’s not very unique) but her songs are written well and you may find one or two that hit the mark with you.

I happen to really like the title track “If I could Fly” because it has some lovely soothing piano. “Escalation” is also a stand out for me.