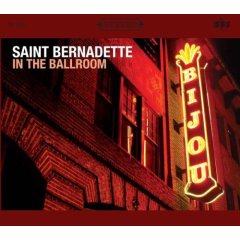 Saint Bernadette recorded their debut album live in an abandoned ballroom. They have an old-time very appealing sound.

Singer Meredith DiMenna has a torchy, haunting voice that’s at its best on the opener “I Own the City”.

“Bound to do” is a more contemporary sounding song that brings out the best in the band members. As ever DiMenna’s vocals are striking and individual.

“Money in the Air” resounds with that nice vintage sound and the melody is sinuous and lovely. It’s like a more natural sounding Portishead.

Can I just say how nice it is to listen to a record where everything was recorded at the same time? It’s less polished than most records today are and all the better for it. Saint Bernadette’s debut promises great things to come for the band.