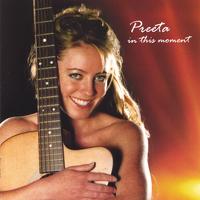 Not sure why, but I wasn’t expecting something this “cool”. I guess, based on the cover art, I was expecting something cheesier. I don’t mean to say that the art is cheesy, but well, it kind of is. Don’t misunderstand, Preeta is a lovely woman, it’s just the clutching the guitar, seemingly naked, and the Christian music/sunset color scheme sort of gave me pause.

It’s amazing what a cover can do to cloud the impression of the music, isn’t it? In this case, I do not think the cover conveys what’s inside. But of, course, that’s only my personal opinion. (The art on the back, on the other hand. is great. I would have switched the two, personally)

But this is a nice pop recording. I can see that she’s very talented. She wrote all the songs and plays guitar on almost all of them.

“Another’s World” is a nice top 40-ish pop song that I can easily see played on the radio.

“Good Enough” some almost has a reggae feel. Interesting.

“On My Own Again” reminds me of J. Lo. It’s the staccato-ish vocal thing, I think. So again, I can imagine this on the radio.

“To Be Loved” is a nice one too and shows off Preeta’s voice nicely.

Since I tend to prefer edgier stuff, this probably won’t make it to my own personal rotation, but it’s nice for those whose tastes lean more to the mainstream.