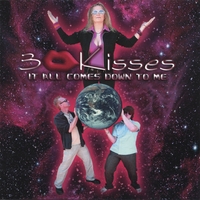 Album Name: It All Comes Down to Me
Artist: 3 Kisses
Year/Label: 2006 / Independent

I reviewed a previous release by 3 Kisses, “Wings”. At the time I thought it had an 80s feel. I’ve got to say I listened to this release several times before re-reading that previous review and ’80s’ didn’t pop into my head even once. So either they’ve changed or I have.

I’d say they sound more like fun pop-punk. It’s certainly party music. It makes you want to jump around like a dork. Or maybe that’s just how I jump around.

After more listens I guess it does have an 80s feel, but maybe it’s because I’m such an 80s girl that I didn’t even notice.

The lyrics on this whole record are pretty charming.

This is a fun summer record.

← Album Review: That’s Amore by Beth Donnelly and Douglass Feller
Album Review: We are the 80s -The Bangles →