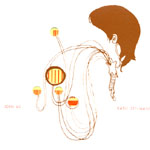 Katie Stelmanis has just released her debut and she’s definitely someone to take notice of.
She makes quirky yet accessible songs and sings like an angel.

The title song carries a strong tune and a rhythm that sets it apart from most things you’ll hear all year. The vocals dart around like restless moths.

“You’ll fall” is dark and airy like a song by Jane Siberry. Stelmanis powerful vocals soar to great heights.

“Heavens” is a dense, thumping track with an intense vocal.

“Natural Woman” is a cover of the Carole King song that closes the album. It’s as original as the rest of the album since she’s remade it in her own image.

Katie Stelmanis is a name to remember, she should go far.