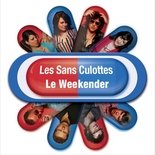 My first thought on hearing this band was “party music…eh”. But as I always do, I gave it several listens and I will say it’s growing on me. Since they were mentioned in Defamer (one of the funniest celebrity blogs ever) I’m guessing they’re more popular than I thought. They kind of struck me as one of those bands that people seem to take to right now, lots of members, lots of stuff going on on stage, best seen live. Only these guys have something the rest don’t….they sing in French!

Now I took French in high school but that was way too long ago for me to have retained much at all. In fact, I seem to remember that “sans” means without and ‘culottes’ were pants (yes, I even wore them back in the day) so that would follow that their name means ‘without pants’**. But I’m pretty sure I’m wrong. Appanretly Sans-Culottes is a movement. [see here] …a political group from the 19th century (and who said you’d never learn anything from that crazy rock and roll music?)

Onto the music. It is indeed party music. But it’s done (in my opinion, remember, no nasty emails) better than say, Scissor Sisters and the like. The songs are short so you can dance like crazy for two or three minutes and take a break. The melodies are catchy and the general vibe is of a good time. If I knew French I would want to sing along. Heck, I want to anyway. Especially on “Les Monstres Du Ca”. It has that response thing going.

This is a really fun record and I can see it being spun in my CD played quite a bit this summer.