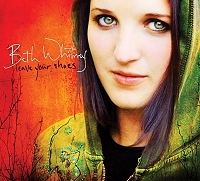 I really wish I had not read Beth Whitney’s bio before listening to her. It stated more than once how she looks up to Mindy Smith and now I can’t hear anything except Mindy Smith when I listen. She really does sound an awful lot like her. I’m 99% positive I would have made the connection/comparison on my own eventually because it’s undeniable. But it’s especially noticeable on the first three songs, especially Wayfarin’ Stranger.

I understand emulating someone you admire, but this is like a carbon copy. Quite a compliment to Ms. Smith.

I like Mindy Smith, I do. I have her debut record and while I do not share her religious beliefs, it’s a pretty record and I enjoy listening to it.

So it would follow that I like Beth Whitney too. When I listen to these songs mixed in with others I don’t always make the Smith connection so perhaps part of it is psychological for me.

So with that out of the way…Beth has a lovely voice. It’s glides over the notes seemingly effortlessly.

The songwriting is equally great. The melodies are catchy and welcoming if not a little predictable. But for this genre that’s totally OK in my book.

The production is just the way I like it. The vocals are mixed up front which, since I love The Voice as an instrument, is just what I want to hear. It’s very professional and classy.

She’s very talented in her own right. I would love to see what her next record brings.