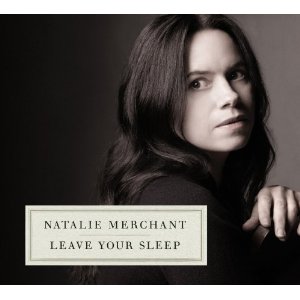 A wandering poetic, seeping loneliness cries out from the shadows of opening track, Nursey Rhyme of Innocence and Experience. Signalling the start of a searching, brooding and well crafted 2 disc album that was six years in the making. A Country N’ Western flavour emboldens Equestrienne , also seeping into the playful, Calico Pie. Already, Merchant shows that her vocals are as comfortable with slow and meandering, as they are with skipping and carefree.

The 26 songs on offer are adapted from a variety of British and American poems with the odd lullaby and nursery rhyme slipped in. Jack Prelutsky’s Bleezer’s Ice Cream, is jazzed up to the nine as a piano and horn serenade each other almost as though they’re in competition. The decision to collaborate with some varied musicians pays fruition by magnifying Merchant’s mood flitting touches.

Slow stirring ballad, Maggie And Milly And Molly And May uses deft percussion, haunting strings and stirring keys to create a heart-tugging vibe. It’s topped off by Merchant’s almost whispered vocals and some cushioning backing vocals. The Sleepy Giant, sees our heroine giving her vocals a soft and supple edge, giving the childish subject matter some stern authority. Whilst a hovering harmonica and nourish backing commentary, adds a sting to the male jazz vocal led lead assault for The Peppery Man.

The 2nd disc is kicked off by a weary dual vocal country styled stroll, Adventures Of Isobel. Showing that Merchant has left no stone unturned, in her quest to find quirky and obscure material to illuminate. A digitally pushed meander through William Brighty Rand’s Topsyturvey World, is helped along by a reggae male vocal outro and Merchant’s own calming and masterful touch. A lounge vibe starts to flow through the second half of this ambitious release and, it’s impossible not to try and reach for a glass of port and some slippers at this stage.

An ability to compose a winding orchestra appears in The Land Of Nod, in order to instil into it a brooding, yet hopeful slant. Seeping strings and a hushed lullaby tone, bears out the at-ease nature and thoughtful folk touch of this enchanting performer, Crying, My Little One. A lovelorn tone lingers throughout this full length, being at its most stretched in the slow turning, I Saw a Ship A-Sailing.

Natalie Merchant has mainly succeeded in showing that hard work, versatility in being able to collaborate with a broad range of musicians/artists and an eye for the obscure, can make for an epic and engaging double album.

Check out Natalie Merchant live in the UK in May 2010:

1 comment for “Album Review: Leave Your Sleep by Natalie Merchant”