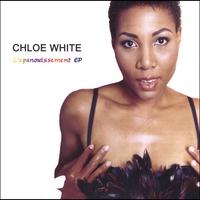 I’m not sure what I was expecting but it wasn’t this.

Chloe White can really rock! I’d say that there’s a bit of R&B edge to her version of rock. But that might just be because she doesn’t have the classic rock voice, it’s better. More of a smooth sultry tinge to it. She doesn’t just scream she belts and it’s great.

“Leave You” is a solid rock song. I was expecting the rest of the CD to follow suit, but it really doesn’t.

“I Want You Tonight” is more of a dance song. A little disco-ish. Reminiscent of the Pointer Sisters.

“Sadie” is a nice R&B ballad while “That Kinda Love” is pretty funky. So the record is a bit schizophrenic, but I think that’s OK because since it’s an EP is less a concept records and more of a way to show what Chloe White is capable of. Which is a good solid record.

Note: I searched for the word, L’epanouissement online and found nothing, but the liner notes imply that is means The Blossoming, presumably in French, Google confirms this.