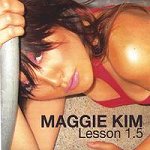 I wish I hadn’t seen the CD Cover before hearing the music. The cover arts just screams, “Sex!” She’s even grabbing a pole. However it looks more like a playground railing than a stripper pole. The photo in the inside (way inside) is gorgeous; I would have put that on the cover instead. I feel the chosen cover detracts from the music. It gives me an impression of the artist before I even hear her (and it’s not a very good one). I went to her site and it’s much much more tasteful. She’s a beautiful girl, she should play that up, not the sex pot thing. So let’s just let chalk it up to personal taste and get on to the music.

Maggie Kim has a pleasant voice. It’s sultry and fits the music well. The music is part techno/disco and part pop. It’s not exactly by cup of tea for everyday listening but she’s good at what she does and it’s a fun little CD. The vocals tend to get a tad on the affected side. (“Can’t you see who you ahhhhh, you’re made of the stahhhhhhhhhhhs”- on “Perfect”).

She wrote all the songs with the exception of her cover of Prince’s “Raspberry Beret” and they are catchy hooky pop tunes with an edge. The production is full and professional sounding, which is hard to do on a techno-ish indie release.

I would like to hear her future releases as I think she’s got talent for sure I’m just not 100% sold yet and I’d like to see her grow as an artist.

Stand out song: “White Girl” has a funky sound to it.