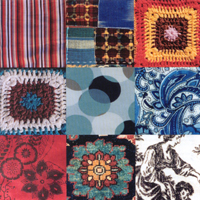 Anne Davis has a really comforting voice. It’s got touch of smoke to it. The genre could be described as alt.folk or maybe even alt.country. But there’s also a heavy dose of Christian religion here.

I can’t help thinking that perhaps the title was a working title that ended up describing just what the album entails. So it stuck. There’s nothing wrong with that.

This does feel like a pretty personal record. These are songs of love (aren’t all songs on some level?) and faith. As I said, very heavy on the religion, of which I am not a fan. But I will say that the musical sound is not that of your regular Christian artists. It’s not syrupy sweet or cheesy at all. Thank goodness for that!

“The Crucible Song” features a uilleann pipe played by a man named Hunter Lee, who unfortunately didn’t live long enough to hear the end result. It’s a beautiful tune and a beautiful sound. It’s almost like a mini bagpipe (though not obnoxious or funereal sounding).

The last two songs, “Until That Day” and “May Your Cokefloats Be Overflowing,” were written for friends as wedding songs.

If you are okay with or enjoy Christian music and are a fan of folk I think you’ll like this record.

Track Listing
Listen to track samples
1. Get Lost
2. Awakening
3. No, I’m Not Going Anywhere
4. Temple of Contradictions
5. Where the Roads Cross
6. Journal Entries
7. Never Too Far
8. Come a Little Closer
9. There’s a Light
10. Days Like These
11. Dear Nanny
12. Elevator Music
13. The Crucible Song
14. Until That Day
15. May Your Cokefloats Be Overflowing