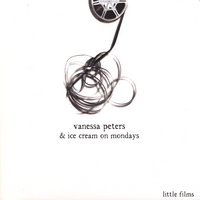 I’ve reviewed a few of Vanessa Peters’s CDs in the past. I’ve enjoyed them all. See the left nav bar for links. This is her newest so let’s just get down to it shall we?

I love the melody and guitar part on “Little Films” it’s just so fun, poppy and cheery. In fact this album is really melody driven. The songs are very well written both musically and lyrically.

Vanessa’s voice sounds great on “Love Story”. That song is reprised at the end of the CD but in piano form. It’s lovely.

“Anti-Hero” is another really good pop song. She has some distortion on her voice, which is a cool effect. Lyrics here are clever too.

I like how the theme of the album is motion pictures, movies, films. It’s not so overpowering as to be considered a concept album, but the songs all tie into each other nicely.

Actually as I run down these songs in order, they’re all really well written fun pop songs. Pop enough to be fun and instantly likeable, but not so pop so as to be too mainstreamy.

If this sounds like your idea of good music (it does mine) give this one a listen. I don’t think you’ll be disappointed.