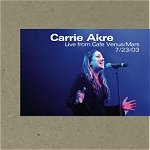 This is a nice little live album. I say “little” because it’s only 5 songs long and appears to be Akre’s set from a night when she opened for someone else. It clocks in around 25 minutes, so it’s still a good chunk of music.

The production is pretty good for a live recording (thought you’ll have to crank it up a bit from whatever CD you may have been listening to before). There is a little crowd noise and clanking of glasses but it kind of sets the mood…adds to the charm.

She appears to have a nice stage presence. I obviously can’t see her, but the between-song banter is charming.

The opening song “Hum Drum” is sparse just vocals with keys. But it shows off her fantastic strong voice. Her voice really gets jazzy and swanky on “Grey”. Love this one.

This is a good way to sample Carrie Akre’s music. I like it.