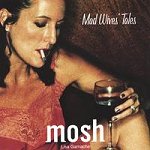 Mosh, or Lisa Gamache, has made a stunning record with interesting lyrics about being, well, a mad wife. It sounds like a hard but rewarding life. The rockin’ “Shiva” gets things off to a good start.

“Not Coming Down” is a Beatles-esque song with a terrific vocal by Gamache. It has strong guitar playing by Janet Robin.

The aggressive “Scream” is also melodic and persuasive. Gamache sings of being in a hopeless relationship and it’s very evocative.

“Aurora” is a bluesy song with a poignant lyric about a mother who escapes her life through the bottle.

“Blue Skies” is a duet with Jim Bianco that brings out the best in both singers.

Rating: 5 Stars
Comment: I LOVE YOU LISA YOU ARE THE MOST TALENTED SINGER ON EARTH! i LOVE YOUR SONGS!
name: Emil y Washinton on Monday, July 11, 2005

Rating: 5 Stars
Comment: Hello, Ya gotta get this CD. First she’s gonna rock ya a new a-hole. I swear that you won’t be able to sit for a week. The grrl’s got some lungs & she ain’t afraid to use ’em. Second, she gives us some haunting melodies that will make ya wanna cry. Check Track #7; listening while driving, I hadda pull over as my eyes teared over. And that’s sober, I swear. Third, the fotos inside the case are much better than the cover foto.
name: alex on Monday, May 2, 2005