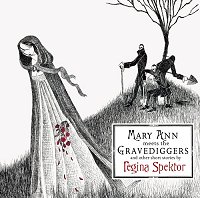 This New Yorker and sovereign of the anti-folk genre has completed her first album for Transgressive Records. It has been approached as though it is a debut album; with a proud display of new found strident defiance of musical norms and hearty cooing, even though this sovereign has been spinning round the music scene and the web like a love-struck black widow for many years. Regina’s commanding narrative style makes you sit up listen and take notes, as sinister tales are espoused. For example, the exposure of empty feelings that comes with having everything in ‘Poor Little Rich Boy’, as well as a sordid look at love and deception with the aid of a porcupine analogy and crisp country/folk backing, by way of ‘Mary Ann’.

Pitching a tent betwixt the rugged, yet calming clarity found in Diane Cluck and the un-tameable yearnings of Bjork is where you will locate the album’s sound, for the most part. Regina displays a sultry knack for telling a tale, with a minimal but catching accompaniment. There is no better example of this than the plucky ‘Daniel Cowman’; containing a strolling and slightly eerie piano element that highlights succinct observations made about the destiny of death. The dark nature of PJ Harvey looms around many a corner to help instil intrigue, although this artist is far more playful in her darkness.

A pinging piano riff is thrown around in ‘Lacrimosa’, to meet up with the more soulful and stretchy vocals that deliver the catchy and pleading lyrics;

Now that more dramatic leanings of a mysterious performer are in the public domain, a cult-like following cannot be far behind, surely?