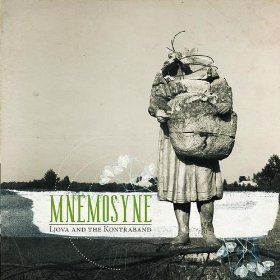 What a great album! Every time one of these songs popped up in my review rotation I took note. Mr Collected Sounds even overheard one time and said, ‘Who’s this? It’s really cool.” And he’s a super music snob.

Ljova is Russian born, New York-based Lev Zhurbin and his collaborators. It’s a mostly instrumental record which often says “film music” to me, and this is no exception. Though it would have to be a very cool, quirky and intelligent film to stand up to this music. (Note: I wrote this before reading that much of there music has, in fact, been in films.)

There are many sounds going on here. Sometimes, it’s peaceful melodic tunes. Especially when his wife, Inna Barmash is singing; she has a lovely voice. But also at times almost confusing and dissonant leaving the listener to say, what the heck? But in a good way.

I mainly hear the accordion, cello and violin (I think…I hope), but also some world-style music drum beats. On one song, even a potato chip bag was used as percussion. (How Easily I Get Lost)

Ljova’s Russian roots show in Koyl. It’s actually an arrangement of an old Jewish folk song. This may be my favorite. Maybe it’s the little bit of Russian blood I have that makes me love this kind of music, but I feel changed when I hear it.

I love that the artist sent along a few pages containing notes on each song. What it’s about, what was in mind when written, the influences…this helps make this record a real journey for me. And one that I’m happy to take over and over again. Class act.

2 comments for “Album Review: Mnemosyne by Ljova & The Kontraband”