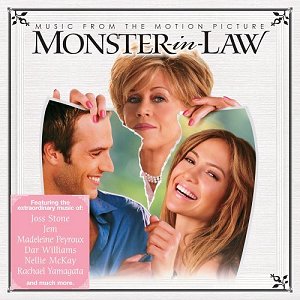 Many of you lovely readers have emailed me asking what the song is that is played in the film when Lopez and Vartan are driving. Since I refused to see that movie, I was unable to help any of you, tho I was tempted to rent it just to look at the credits. But one reader was actually able to give me some lyrics! So, on a whim, typed those words into Google and I learned…da-da-da-duh!!…….

So glad that mystery is solved and happy to know that my site is the only one on all of the internets to have this information!!!

I had a feeling that Jennifer Lopez would find a way to get on this site. But at least it’s not for her music. Personally, I wouldn’t be caught dead in a theater showing this film, and if you feel the same way, don’t let the soundtrack turn you off. This one is pretty good!

Most of the artists I’d already heard of; many I already own the CDs. So even if you’re like me and already own much of this stuff, it’s still a good purchase. Think of this as a good mix CD that you didn’t have to put together.

I’m glad to see Rosey getting some deserved attention. I loved her CD, “Dirty Child”. I reviewed it in 2002 and it is still in my rotation. This version of “Love” is different than the one on “Dirty Child”. It’s loungy and snappy. Very very cool. I love it.

Nellie McKay is another one that I really thought would become super famous and her popularity just kind of fizzled. I guess the world wasn’t ready for a 19-year-old musical genius. The CD, Get Away From Me” is fabulous as the track here, “Won’t U Please B Nice” it’s a sassy smart-ass song therefore gets top rating from me.

Rachael Yamagata was recently reviewed her as well. Man, does she sound like Norah Jones here or what?

Tegan and Sara were one of my favorite new groups back when I met them in 2000. I’m not a fan of this song. But am still glad to see they made it onto this soundtrack.

I’ve been hearing Ivy on the radio lately and am in love with her voice. Very nice stuff. “Thinking About You” is luscious pop. It makes me smile.

Madeleine Peyroux has been on my radar since I saw her open for Sarah McLachlan in 1990-somehting. She did a Patsy Cline song that slayed me. She blew me away then and she’s only gotten better. I love her. She makes me want to sip whisky on my front porch on a rocking chair in the dog days of summer.

Dar Williams of course is one of my idols. This website was named after one of her songs. (“I collect these sounds in my ears” from “What do You Hear in These Sounds?”)

Now for the bands I was not as familiar with:

I have heard some Jem songs on the radio, but it didn’t grab me enough to pursue her music anymore. This tune is very nice. Smooth sweet vocals over a trippy tune. Perfect summer listen.

I knew nothing about this band/person Esthero I’m surprised seeing as they sound like 70s pop and feature a piano…two things that are right up my alley. This is a great track. Lovely piano…think a female Ben Folds. I don’t know if this is indicative of her other stuff, but it’s lovely. How did she escape me for so many years? She’s been around forever! One to check out surely.

Astaire? No idea. Never heard of them. Soft whispery vocals over techno beat. 80s. Eh…my least favorite on the CD so far.

Since I Don’t like blues, I am aware of Joss Stone but I’ve never paid much attention to her. To me, she’s a cuter skinnier Janis Joplin. I can admire the talent, but that doesn’t mean I enjoy it. This song belongs on “The Big Chill” soundtrack, not here. But of course, that’s just my humble opinion.

Magnet is another I’d never heard of…what? A boy? Yep, Magnet is Even Johansen. He’s from Norway. Beautiful voice. “Where Happiness Lives” is a lovely song. Mmmmm…another one to check out. Apparently happiness lives in Norway.

Sara Bareilles is another bluesy girl. “Love On The Rocks” is probably the weakest track on the CD. She’s OK, nothing spectacular. She has a great voice. The songs just doesn’t do very much for me. But it sounds like one that might grow on me with further listens.

We end with Dar. I’ve already said how much I love her. She’s just plain perfect.

This is a great trip through what current female musicians…and one token (lovely) boy are offering. Pick it up, you won’t regret it.

Rating: 2 Stars
Comment: I was looking for the same damn song ( the one where they are driving)and I cant find it! Does anyone know where to get it?
name: mike on Thursday, March 9, 2006

Rating: 5 Stars
Comment: there is one song on the movie that isnt on the soundtrack… its where their driving to the engagement party.. i cant find anything on it.. does anyone know?
name: Tammy on Monday, June 20, 2005