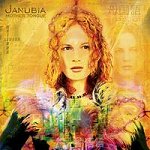 Well, don’t even try to figure out the lyrics. Janubia is unique in that she sings in her own language. It sounds like it could be spoken in another land, it sounds like an established language. That is, one that is spoken and understood by more than just one person.

Being a music fan who usually depends on lyrics to set the mood and feeling of a CD, I wasn’t sure how I was going to take to this. But it’s really incredible. It’s fascinating to me how someone can make up their own language. If most of us tried it would probably come out sounding like gibberish, but this doesn’t. One thing I am not sure about, is if she’s just vocalizing or if this is a real language that is translatable. That is, if she were to perform these songs live, would she be singing them exactly the same way or be making up something different. Doesn’t matter, the result is that it sounds lovely.

Janubia has a beautiful voice. It soars and sweeps over the music which is a mixture of new age, Celtic, Latin and I don’t know what else.

This is a unique and beautiful recording.

Rating: 5 Stars
Comment: This was one of the CDs at the party last night, and the reaction was great. Everybody was asking, “Who is that?” Some songs you can dance to and some are just good listening, whether for background or foreground. I don’t understand why Janubia hasn’t hit the airwaves. When she does, she’ll be an international hit! Meanwhile, all we can do is spread the word. I got my copy at Amazon.com.
name: John McTarney on Monday, May 22, 2006

Rating: 5 Stars
Comment: Mother Tongue is a veritable masterpiece. The songs sound like classics, though they’ve never been heard, and Janubia has a voice that I wish I’d always heard ~! Incredibly, Son Raih Si (track 9) brought tears to my eyes, somehow unleashing a deeply buried emotion, and I felt as if though some part of me was understanding every word. Listening to this cd is like taking a trip through some unknown and yet hauntingly familiar world. Incredible work.
name: Kate Stromberg on Wednesday, April 13, 2005

Rating: 5 Stars
Comment: I agree this is fabulous. Second song could be a worldwide radio hit, maybe first song, too. I would hope that when she sings live she sings the same lyrics (if that’s what they are), because I’ve sort of memorized the sounds by now and it would be a letdown if she sang something other that what’s on this great CD. All I can say is it’s worth buying and spreading the word. I called my radio station but they don’t have it yet.
name: George Stevens on Saturday, December 25, 2004