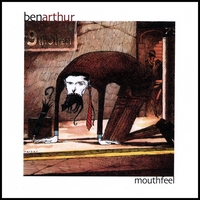 Well, I’ve been smitten with Ben Arthur since I heard his song Keep Me Around from his previous release, Edible Darling. I reviewed that back in 2004 and have been eagerly awaiting more songs since then. But what is it with the ooky album covers? Tomatoes with teeth? I don’t even know what to make of this one. Is he barfing up a rat…or eating one? The art is cool, I just don’t think I get it.

His style is sort of jangly pop with an Americana edge. The songs have a good dose of humor or at least cleverness to them. Last Goodbye, for example, is pretty funny.

His voice is deep, smooth and comfortable. His voice is very distinctive. You know a Ben Arthur song when you hear it. That’s a good thing. It’s hard to be unique in a world so full of musicians. But he does it.

I love how the songs are generally mixed with his voice right up front so it sounds like he’s singing right in your ear.

Sun Also Rises is a duet with Rachael Yamagata. Their voices sound lovely together. It’s a great pop song.

Another stand out for me is Ever Since September (featuring DJ Big Wiz); mostly because it’s quite different from what I am used to with him.

Note: Ben played two shows in Minneapolis: a house concert at Collected Sounds and a bar show at Aura May 3 and 4, 2008.

Track Listing
Listen to track samples while you read
1 Tattoo
2 Sun Also Rises (featuring Rachael Yamagata)
3 Psalms of War
4 Ever Since September (featuring DJ Big Wiz)
5 Exit Wound
6 Last Goodbye
7 On a Sunday
8 Beautiful Day in LA
9 I Told You I Love You (Now Will You Leave?)
10 All Along (live in London)