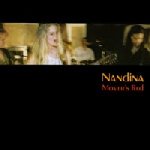 The band Nandina are fronted by Meg Isaac. Their alternative rock sound owes much of its success to the band’s tight playing and Isaac’s unique voice.

They dart between different styles and appear to be at home in all of them.

The quirky “Waiting” wouldn’t be out of place on a Breeders album. “Call it Out” has a hip hop influenced beat and some nice rapping from Isaac. The calmer “Turning” has a great folk influenced feel.

Nandina are a truly eclectic band and this cd show them at their best.