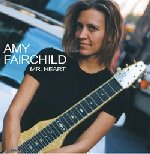 This is Amy Fairchild’s second CD. Her first was “She’s Not Herself”, which was released and produced by Amy in 1996.

I first heard of Amy Fairchild when someone mentioned that she had written a song about Jeff Buckley. So I was excited when I received a pre-release of her new CD, “Mr. Heart” (due out February 2002).

Amy creates a nice folk-rock sound on her new CD. She has a great voice reminiscent of Sarah McLachlan at times especially on the track “Humble Pie”. But Amy’s voice has a bit more of an edge to it. The music is engaging, strong, melodic rock with complex melodies. Filled with guitar, solid drumbeats and the occasional piano.

“OK, Alright” is probably my favorite, I just love the melody on this one. THe next track, “Shade of Blue” makes me want to learn how to play the drums. I dare you to sit still on this one. I also really enjoy “Renee”, about a woman who once lived upstairs from Amy. She calls it “…my own version of Suzanne Vega’s ‘Luka’, Sorta.”

This is a great CD all around. Amy is one to watch. I predict great things for her.

6/5/2002: A little addendum to my review..after I reviewed this CD in January I sort of just put it into by (ever growing) CD collected and forgot about it. I took it back out about a month ago and haven’t been able to stop listening to it. I mean, I really liked this recording when I first listened, but now I am in love.

The songs I liked previously I now listen to 2 or three times over. The ones that just sort of washed over me are now stuck in my head. Get this CD, you won’t regret it.