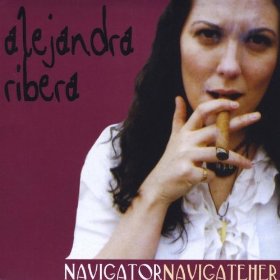 Alejandra Ribera has a cool, smoky voice that she uses well on this striking album. Her songs are hard to place in any one genre, but they are all good.

The Greatest sees her go kinda cabaret with a neat tune and as ever her vocal is enticingly bold.

Veinte Anos sees her sing in Spanish to a tune that takes its influence from that country and intriguingly so.

Sans Vous is sung in French and contributes to the neat multi-cultural vibe to this record. It’s sultry and sparse.Ribera’s vocal is seductive and has such depth to it.

Bad Again sees her softly echoing some jazz singer from a bygone age, but with her own flavor.

It’s a stunning album that deserves a chance. Go check it out.