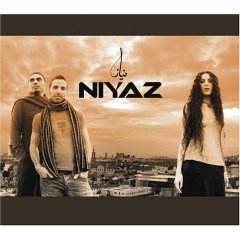 From the future: You can also get Nine Heavens by Niyaz
[Buy at Amazon]

I first heard about this band because I was reading the blog of a friend of mine. She mentioned it as the music she was currently listening to. Being a fan of my friend’s music and respecting her musical opinion I checked them out. I did a little Google search and found their website and listened. I was hooked immediately.

I’ve been known to have quite an eclectic taste in music. I rarely say I dislike a genre as a broad sweeping statement. (However I can say this about blues and I’ll usually be right.) But one of the genres I really like, and I don’t even know if this is a genre, but ambient, dreamy, far away sounding music. OK if that is a genre, that’s not the official name of it. But I think you know what I’m getting at.

I would put Niyaz in the same arena as Dead Can Dance. It’s ambient with a far off land sort of feel. There’s definitely an Asian flair, most Indian to my ear.

Looking at the liner notes I see that the songs are based on Urdu and Persian poems. I know embarrassing little about these languages and regions but I love what I hear.

Azam Ali is the lead singer and while I don’t speak or understand the languages in which she’s singing I feel transported by her voice. It’s beautiful.

If you like Dead Can Dance and other groups like this, I think you should give a listen to Niyaz. Also singer Azam Ali has her own solo albums too. The music is very similar so if you like one, you’ll like them all.