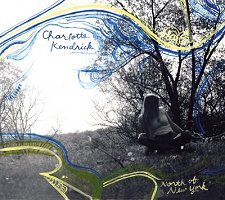 I was not expecting to like this one as much as I do. Upon first listen I thought it was pretty country and I’m not generally a fan or country. But these songs have attached themselves to me and won’t let go.

The songwriting sensibility recalls Dar Williams’ style. The voice is nothing similar, but the melodies and productions are. Beth Amsel would be another similar artist (again in style not in voice).

Speaking of voice, Charlotte Kendrick’s is so comfortable and appealing. I could listen to her all day.

Some of the songs have a male vocal harmony part which is a lovely addition. I assume the voice belong to her long time collaborator, Dan Rowe (though I have a pre-release so I don’t have the liner notes). The two sound great together.

“Caroline” is a lovely song about a women in her life that obviously affected her. I’m curious though why she is saying “So Long” to her. Maybe she’s just moving away. But I’m intrigued.

There is something so intimate about the sound, production wise that makes it feel like she’s right here singing right to me. Very nice.

In looking at her site I see she does house concerts, I’m so bummed I’ve had to put mine on hold because I’d love to host her. Maybe someday!!