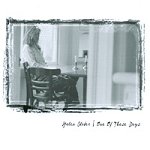 Maybe it’s just because I know Helen Slater is in show business (she’s the same Helen Slater that appeared in “The Legend of Billy Jean” among other films of the 80s . I personally loved “Chantilly Lace”) Then again maybe I would have this impression not knowing her history, but these songs have a show tune-y quality to them. Believe me, that’s not a bad thing, I grew up surrounded by theater people so I like it. Then again, some listeners may find it to not be theater like at all. My husband thinks the music sounds like it belongs on “The Muppet Show” (and he has a long standing crush on her) so there’s that too.

What it does have is an old fashioned pop sound, ala Carole King (“Get Up”) or James Taylor (“One Of These Days”) maybe even a “Free to Be You and Me” feel on some tracks (it’s probably the wind instruments).

The record has a general overall appealing sound. Slater’s voice is crystal clear and lovely. It sounds much younger than she is. It’s sweet (by the way, she’s still gorgeous and looks about 17).

The songs are quite well written (all by Slater), the melodies are interesting and don’t go exactly where you expect them to, which is hard to accomplish and also refreshing to the listener. The lyrics should appeal to fans of Dar Williams and other storyteller writers.

Pretend you don’t know she’s “Supergirl” and give this one a listen. I know this is one that I will be spinning over and over again.

Stand out songs: “Greenland”, “Touch And Go” and “Love Comes”