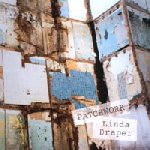 Linda Draper has an interesting voice, and I mean that as a compliment. I haven’t heard such a distinct voice since I first heard Audra Kubat’s “Untitled For Now” which; upon first listen became one of my favorite CDs. Their voices are similar to each other yet so unique. They both have an “old-school folk” feel to them, however.

Linda’s voice is a bit swoopier; a style that usually doesn’t appeal to me but in her case is very lovely. Probably because she doesn’t overdue it. It’s clear and strong and a great fit for the music; which is simple guitar strumming well-composed melodies.

Her lyrics are clever and touching, on Seven Black Crows” where she repeats:

“The Sleeping Giant” has an almost sing-along quality to it, not sure why I think that, but I do.

The title track, “Patchwork” has some vocal distortion on it, which sounds cool and is a little more upbeat than most of the other songs on this recording.

She ends with “It’s Not About Love” which is maybe my favorite song on the recording.