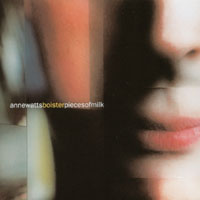 I’ve reviewed Anne Watts and Boister before, their “Song of the Smoke” was a great record so this was something I looked forward to hearing. It’s still modern cabaret with a strong singer and an individual band.

“Rubberball” is bouncy and quirky. Watts’ husky voice and the songs playful mood go well with each other. “Little Man” does the cabaret thing and has some spirited trombone playing. The bands jazz influence is also in evidence.

Generally Watts and Boister draw in a myriad influences and make it into their own sound. Shades of Tom Waits in his “Rain Dogs”-era abound and a little of Jill Tracy’s absinthe-green menace is there. This group is perhaps more boisterous and less languid than Tracy though.

“Deliver” is sparse and slow. Watts singing her tale of weird people carefully.

“St.Nevermore’s Day” uses words by Berthold Brecht set to music by Watts. The result is a stunningly odd cabaret-rock hybrid.

So with “Pieces of Milk” Watts delivers another great album.