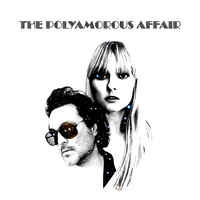 Eddie Chacon was in the duo Charles and Eddie who had a big hit with the song Would I lie to you?. Alongside Sissy Saint-Marie he records urban and very chic disco on their debut.

Whoever Controls the Groove should get dancefloors spinning, a heavy bet set against Chacon’s smooth vocal.

Merry Go Round sees a nice interaction between the two singers, as a handclapping rhythm takes over. Sainte-Marie’s girlish coo lends itself well to this song.

Riviera lives up to its title by being cool and glamorous, like a modern day Grace Jones. Chacon takes charge as Sainte-Marie plays the seductress.

It’s a glamorous, frothy and sweet record. And it’s guaranteed to start your party right.