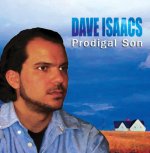 Dave Isaacs first solo recording, “Prodigal Son” hits the ground running. Loosely classified as Americana, the project is a sensitive syncretism of parts – a coordination of sounds and styles.

The opening cut, “Isabella” is an irresistible amalgam of influences. Insistent unobtrusive drumming anchors an exploration of textures – now some Gypsy fiddle (violalin actually), now a sprinkle of tasty Mandolin – dancing in and out of one of those melodies that just stick to you (and get hummed in the shower).

Moving another step into the land of luckless love, “Never Giving Up” calls on Isaacs’ bag of rock tools. A light shuffle beat trades center stage with subtle wahwah and some subdued fuzz. Dave’s sense of “less is more” shines through. No over-arranging on this CD. Each riff is in its place, serving the totality.

You can see the “moonlit snow” in “Wolf at the Door.” And the howling of voice and guitar, which could have been hokey, dodges the bullet and takes its place in the tune with a convincing “click.”

“Into the Blue” has a bit of a Beatles feel to it. Delicately spaced pedal steel compliments a selection of guitar approaches. A straight-ahead taste of Nashville followed by another break with distinctly rock overtones.

Tasteful “woo woo” girls and a great chorus hook distinguish “The Moon.” Classical influenced guitar trades licks with cello or violin, conveying the poet’s reflection on the moderating influence of age and experience, in “What I Have to Do”.

Having artfully woven a tapestry of diverse elements, Isaacs hits his poetic crescendo in “Moment of Grace.” Here Spanish flavored guitar work gives a transcendent quality to the age-old theme of redemption. “In a moment of grace all karma is burned.”

I’ve always wanted to write a song with almost no lyrics. To do so successfully, however, requires considerable instrumental mastery. Again, Dave’s classical training carries the day, in “When I Die” – the fitting final cut on “Prodigal Son”

When I die
Bury me with my guitar
Beneath the sand

Well, later for that Dave. I want to hear you play it awhile yet, before we plant ya. This recording is a triumph of fine writing, fine playing and particularly astute arranging. A smorgasbord of flavors. Bon apetite.