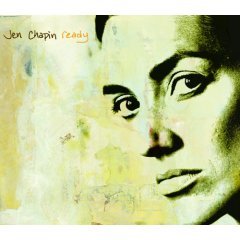 I reviewed Jen Chapin’s previous release, Linger back in 2004 and I enjoyed it. I liked that it was kind of a jazzy record. This one is as well. There’s definitely something unique about this artist.

Having said that, I do hear a little Lisa Loeb on “Strip it Bare”. Probably just how the melody goes along on one plane then scoops into a series of higher notes.

Chapin has a knack for writing interesting melodies that are catchy without being too poppy. This is clearly in the AAA genre. Music for grown ups.

Not that it matters, but she is the daughter of Harry Chapin. I did not know that when I wrote the last review. Like I said, it makes no difference, just an interesting tidbit.

Rating: 5 Stars
Comment: Jen has come really far since her last CD – Did anyone see her on Conan? Great stuff !
name: Ariel on Monday, June 12, 2006