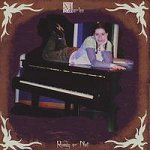 Marlee grew up around music as her parents owned a music studio and she learned to play piano at a young age. I find it interesting that she now plays guitar prominently on this CD and in fact, even has a song called “Me & my Guitar”. Though the piano is there as well.

I normally don’t like blues in part, because it sounds like the singer wants to kick my ass, but this is nice. But “Small Town Blues ” is a nice sweet blues song.

The other tracks have a little but of a blues influence, but it, thankfully, doesn’t knock you over the head.

The ones I prefer are, of course, the piano tunes. “Rise Above” is beautiful. “Behind Closed Doors” has a pretty melody.

Packaging note: Someone please to buy her a digital camera for Christmas. The packing is really cool, the way it’s laid out, the colors chosen, the font…but the photos are dreadful. They’re splotchy and blurry and all pixilated. Maybe it’s supposed to be artful, but it just looks out of place to me.

Track Listing
Listen to track samples
1. Small Town Blues
2. Behind Closed Doors
3. Devoid of Meaning
4. Haunting My Every Day
5. Me & My Guitar
6. Past Midnight
7. Please Don’t Ask Me to Stay
8. That Kind of Feeling
9. Rise Above
10. What About Us?